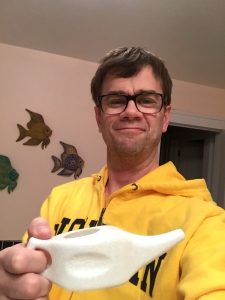 It seems that about 75% of my life involves nasal congestion with sinus pressure around my eyes.   It’s probably allergies to various tiny stuff floating through the air.  Not sure about that but I am so stuffy so much of the time that the makers of decongestants have taken to sending me thank you notes for my business.

I’m particularly stuffy in the winter months which I attribute to dust and mold and whatnot floating through the air – especially when Julie (my wife) turns on the ceiling fan in our bedroom.  Which is every single night.  Even in Minnesota.  In winter.  When it is 5 degrees outside.  Let’s say she likes the place cool.  You could hang sides of beef in our room.

At the risk of exposing marital disharmony over the ceiling fan issue, I think the fan clogs me up as it perfectly distributes dust and pollen and such around the bedroom and into my nose.  It’s like a fertilizer spreader spewing dust onto me as I sleep!  So I pop the decongestants and antihistamines.   Yet my sinuses remain perpetually clogged.  In case you’re wondering about the marital harmony situation  . . . I claim the ceiling fan needs to be turned off to save my sinuses.  My wife claims I just need to vacuum and dust more often.  See what I’m up against?  How can you reason with such nonsense?

Basically I’m pretty sure I have chronic sinusitis which is a long-lasting inflammation of the sinuses and nasal passages.  Inflammation, being my body’s defense mechanism against all airborne invaders, tends to clog up the works in my head.  I won’t get into the issue of inflammation vs. viral infection vs. bacterial infection except to say that most of the time the problem is not bacterial and hence antibiotics are not usually needed.

I have plenty of company

Today on the Healthy Matters radio broadcast, there were several, I mean lots and lots, of listener questions about sinus headaches, nasal congestion, sinusitis, colds and influenza.  I guess I’m not the only one around here with a nasally twang to my voice!

If you missed today’s radio show, listen to the podcast by clicking the play arrow in the player here:

Himalayan yogis were on to something

There is relief!  In this post I’m going to talk about jala neti.  Perfect, you say?  You’ve always wanted to know about jala neti, right?  Actually, it is simply Sanskrit for nasal irrigation and it is something I actually recommend and something I occasionally do myself.

Yup, that’s me in the picture at the top of this post showing off my very own neti pot.  But first a bit of history . . .

I’m on shaky ground trying to explain the origins of  nasal irrigation as I know virtually nothing about ancient Ayurvedic practices.  My wife knows oodles more than me!  But I guess it all started some five thousand years ago when yogis in India and the nearby Himalayas included the jala neti – nasal irrigation – into their yoga and meditation practice.  I think it was more in pursuit of meditation discipline and keeping in balance as opposed to washing out viruses and avoiding a trip to the drugstore for decongestants.  Anyway, the practice has been around a long time.  And I think that something that has been in practice for literally several millennia is worth our consideration.

By Michel Royon via Wikimedia Commons

What do our sinuses really do?

Nasal irrigation really makes sense when you consider what our sinuses do.  (The full name is paranasal sinuses since the four sets of sinuses are next to the nose.)

I have to admit, sometimes the actual purpose of paranasal sinuses is rather murky.  I remember a time in medical school when someone asked that very question:  What do our sinuses do? It may be that they lighten our skulls a little bit since sinuses are really just holes in our bony skull.  It may also be that they affect our voice for better or worse.  Not sure on that one myself, but I had a medical school classmate who was also an opera singer (really!) and she claimed that her voice definitely was affected by her sinuses.  I figure if a real opera singer says her sinuses affect her voice, who am I to disagree.

All that aside, though, and you get to the major purpose of sinuses and that is to produce mucous to lubricate the works in your head.  Each of the sinuses has a small passageway through the bone of the skull which leads to the nasal cavity.   The mucous (as much as a pint or two a day!) flows through the channels in the skull and carries along with it all the crud that makes us sick.   As long as everything is flowing adequately, this is an effective mechanism for clearing out pollen, dust, viruses, bacteria, sawdust, pollution in the air and just about anything else that gets into our heads when we breathe.   We can simply swallow and/or blow out the crud.   But when it gets too thick or infected, everything backs up into the sinuses themselves and the pressure and pain and drippy nose ensues.

Here’s a pretty good diagram of the anatomy (although for some reason this cartoon person sort of creeps me out): 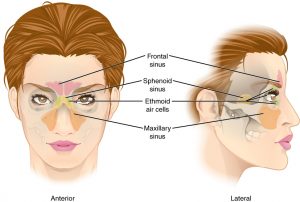 So how does one irrigate the sinuses?

Nasal irrigation simply cleans out the plumbing.  There are several ways to do it.  For instance, check out the technique used by this woman:

There are easier ways to do it.  In order of increasing effectiveness (in my opinion only, for what it’s worth)

Packaged saline nasal sprays tend to only moisten the nose cavity and really don’t irrigate the sinuses.  That is beneficial in dry winter air but maybe won’t be enough for the our purposes.

Using a bulb or other type of syringe to more forcefully spray salt water into the nostrils works a little better than the sprays, but again doesn’t really do much beyond keeping your membranes moisturized.

Nebulized treatments work for many people.  A nebulizer, aka a vaporizer, is a machine from which you breathe in the salty mist.  You can get one at a drug store pretty cheaply.  Or somewhat less cheaply, you could move to Hawaii and get the ocean air.  Just saying.

Neti pot.  OK, this is the one I want to talk about.  That’s me holding a cheapo plastic one which I purchased for less than $20 at the local Five & Dime.  You can also get fancy ceramic neti pots which are aesthetically way more hip so there’s that to consider. 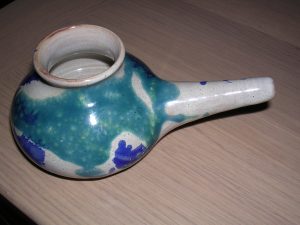 Photo: I, Biopresto, via Wikimedia Commons

The process is simple.  You put lukewarm water in the pot and stir in some salt powder (which comes with the commercial neti pots but which you can buy yourself).  Then, you lean over the sink, tilt your head to one side, insert the tube into one nostril, open your mouth to breathe, and gently and slowly pour the water into your nose.  It will flow out the other nostril (assuming you aren’t 100% completely clogged up).  The you switch to the other nostril to get the two-way flow going.

Makes sense, eh?  I imagine the dust and pollen and viruses getting carried out with the flow of water.  Reminds me of my Minneapolis street when the snow melts in springtime, taking the sand and salt and dirt of winter with it in mini-rivers along the curb.   If I am feeling congested, doing this once or twice a day really seems to help me.  And there are no drugs and very little risk to the whole operation.

Here is a pretty good clip demonstrating how to use your neti pot (note I don’t endorse any products or websites that you see, but this one looks OK to me):

Notice I said very little risk to doing nasal irrigation.  Didn’t say there is no risk at all.  To do this safely, you really should use distilled water or boiled water that you have cooled.  This is because some pathogens – especially parasites or bacteria, are possibly present in tap water.  There were two well-documented cases of people dying from a brain infection with amoeba from using tap water.  That was in Louisiana in 2011.  It’s not common at all but to be really safe you are advised to use safer water from a bottle or water than you boiled and completely cooled.

The other caution is about water temperature.  Both too hot and too cold will cause problems (pain, burns in your nose, etc) so use lukewarm water only.  Be sure to add salt to the water as well (sometimes with a touch of baking soda as well) since plain water will also hurt.

The US FDA has a good page about sinus irrigation safety here.

There is scientific evidence for all this

Lastly, I feel strongly that we should be open to new ways of doing things like nasal irrigation with the neti pot, even if that “new” way is really a “5,000 year old” way.  But I also feel extremely strongly that we in the medical profession must adhere to medical science.  This is a case where there really is an intersection between ancient yoga practices and modern science.

Most of the science on nasal irrigation concludes that a) there is some benefit to nasal irrigation in quality of life and lessening symptoms and b) it is quite safe and therefore c) it is something doctors like me can recommend.  If you are interested in the research, just search for “neti pot research” or some such thing.  Just keep in mind that not all Internet sites are equally reliable.  For the hardcore science, here’s one study about nasal irrigation and the common cold.  Here’s one more about chronic sinusitis.  Or just watch the CNN piece from 2016.

Hope this was helpful!

Sign up to get this blog by e-mail by entering your address below.  Follow me on Twitter @DrDavidHilden.  And be sure to tune in on Sunday mornings for the LIVE Healthy Matters radio show, WCCO 830 AM in Minnesota or streaming live from anywhere in the world at 7:30 a.m. Central time on WCCO.COM.  All brought to you by my home base, Hennepin County Medical Center.