Procreative success and Blue Zones?  The whole thing sounds like it may not be suitable for discussion in mixed company.  But rest assured, it’s all good, nothing indelicate going on here.  This is a post about living long and living well.  Please read on . . .

On my HealthyMatters radio broadcast last Sunday, we talked a great deal about keeping your heart healthy – after all, it was Valentine’s Day and I’m not above doing a cheesy tie-in between chocolate hearts and actual cardiac health.  I’m sentimental like that.  But good thing I brought someone to keep me from milking the sappy heart analogies too much . . . 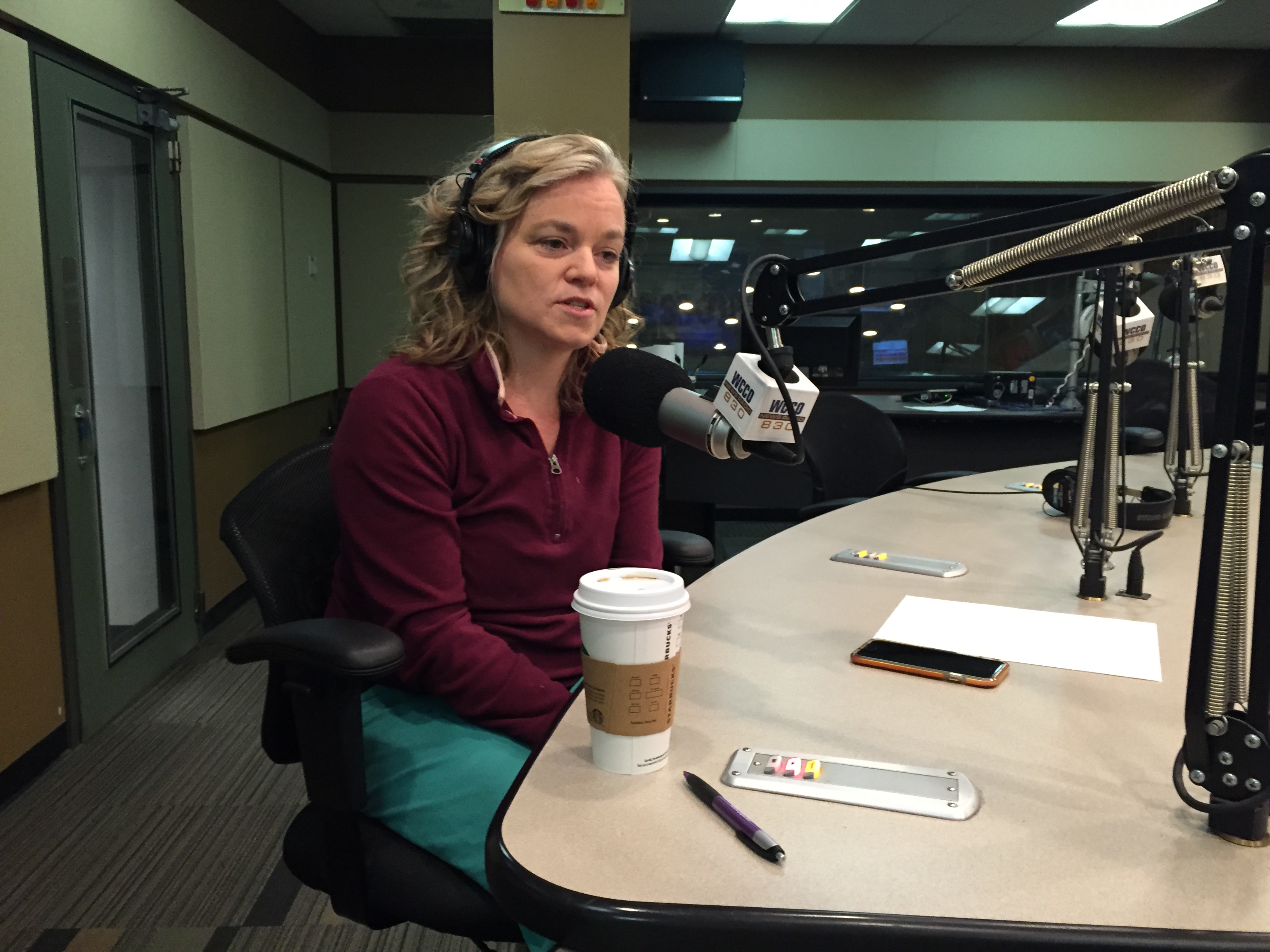 To help me out, I asked my super smart good friend Dr. Meghan Walsh to join me – you’ll want to click on the Listen to Podcasts link on the right to hear her advice about broken heart syndrome, aka stress cardiomyopathy, and other heart topics.  She’s a hospitalist (cares for people in the hospital) with a focus on cardiology – in other words she totally knows what is going on when you have a heart problem.  And she should know a thing or two about keeping it healthy.  Too bad she hails from “the wrong side of the tracks” (which to a Minnesotan like me means she’s from Wisconsin).

Lately, though, I’ve been thinking about living longer and living well.  I talked about “Living to 100” on TV last week , I wrote my last blog post on “Living to 100,” and I just worked a week in the hospital where I pronounced the deaths of two people and cared for several more in the last weeks of their lives.  Let’s just say longevity is on my mind.  So Meghan and I talked about not just heart health, but how to actually live longer in general.  And during the show, she brought up the concept of Blue Zones.

Say what?  Blue what?

Well it turns out some cool people have looked all around the world and located little pockets where people actually do live a good deal longer than the rest of us.  And they do so with vigor and purpose and vitality.  This intrigued me, and having looked into it more, I’d like to share it with you.  Read on for more . . .

So what the heck is a Blue Zone?

Turns out there is a guy from Minnesota named Dan Buettner who worked with National Geographic to identify areas in the world where people actually live longer than the rest of us – and then to try to figure out how they are doing it.  I haven’t met Dan but I’d sure like to.   He called these areas Blue Zones: 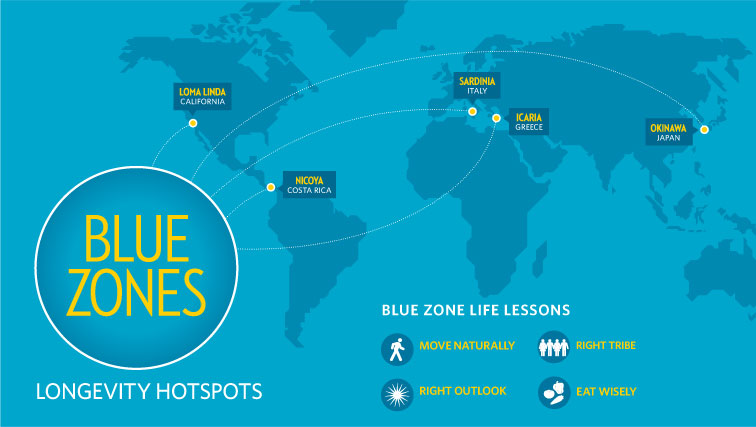 After studying these areas, where people routinely live longer than in most other communities (even living to 100 and beyond), the researchers learned some key factors – and none of them required fad diets or going to the gym!  He wrote a book by that name and he’s given some really engaging talks about it.  They will really get you thinking:

In his work on Blue Zones, Dan Buettner learned that these 5 communities shared 9 important characteristics, grouped into 4 categories.    Note that all of this is his work, not my own – I want to give appropriate credit –  but I’m going to paraphrase them here and include how some of it makes sense in my own life.  Maybe it will in yours as well.

And you’ll just have to read to the end to learn about procreative success.

Communities in which people live the longest tend to be quite active, but it is not through intentional exercise – at the gym or anywhere else.  Rather, they structure their communities and routines so that movement is a routine part of daily life, not scheduled like we do.  Gardening.  Taking the stairs.  Regular hikes for leisure.  Mix the cake batter by hand rather than use the mixer.  Stuff like that.

The Okinawans of Japan have a saying  – ikigai – which basically is the reason you get up every day.  The Blue Zone researchers found that having a sense of purpose is worth 7 years of extra vigorous life expectancy.  So many of us, however, retire from our jobs somewhere in our mid-60s, then try to figure out what to do that feels meaningful after that.  But Dan found that really old people in Japan still maintained a sense of life meaning – be it fishing, holding great-great-great grandchildren, or doing martial arts.

Here in Minneapolis, this week I admitted to the hospital a woman in her 80s who broke her hip while playing volleyball. Her goal was to get well enough to get back to her active life.   The take-home point is not that she broke her hip; that was an acceptable risk to her.  The take-home point is that she was out playing volleyball.  Awesome.   (Full disclosure – I changed a couple bits of her history to protect her privacy – but the message is the same).

People who live longer tend to know how to chill out.  They do this in ways that are meaningful to them, something we could all learn to do.

I’m about as Type A as they come and tend to talk too quickly, move too quickly, eat too quickly.   Guilty as charged.  When walking around Lake Harriet with Julie, my wife, she often grabs my hand.  I like to think it is for romantic reasons, but as she points out, it’s to keep me at a pace that doesn’t require her to jog to keep up.  So calming down is not a strength of mine.  But I do try.  Like live classical music concerts.  For me, a heavenly evening is spending an evening at Orchestra Hall listening to the Minnesota Orchestra.  I don’t talk to many – or any – people since I usually go alone.  For my wife, and many of my colleagues who are doctors, stress reduction means a ritualized practice of meditation.  For you it may be something else.  But we need to learn to sloooooooow down.

(Quick aside – we recently did a HealthyMatters show on meditation with a cardiologist colleague of mine, Steve Goldsmith, and a Buddhist master, Marc Anderson.  Listen to the podcast here).

This is one I’ve been harping on for years when giving my own presentations on living long.  Portions sizes today = obscene!  Believe me, when you go to one of those big sports bar restuarants, you know the kind with 98 big screen TVs lining the walls, there is nothing OK about the size of that plate of food.  There just isn’t.  There are enough calories on that plate for two or even three meals.  Eating less is something we can and should do – and there are tips to help.  Like reminding yourself before every meal to stop eating when you are 80% full like the Okinawa folks.  Or putting the food on the plate in the kitchen, rather than serving family style at the table where you are tempted to take more helpings.  Or just use a smaller plate.  Simple as that.

I’m sorry if you are in the meat-producing business, but I have to say it.  It is pretty clear that we need to eat, as I say, “lower on the food chain.”  Plants and legumes should be the mainstay of our diets – and the more colorful, the better!  The dark green, rich red, and bright orange ones are best.  This is pretty well established advice.  If you do eat meat, make it lean and in much smaller portions than we are used to.  The meat – if present at all – should be the size of a deck of playing cards.  The veggies, whole grains, and legumes should take up most of the real estate on your plate.

A glass or two of wine daily is probably reasonably good for you, at least if you look at the communities where people are living a long time.  Many of us doctors have been saying this for years, and there is some evidence to back it up.  After all, people in Provence seem to do OK with it.  I always qualify this recommendation, however, because it just isn’t for everybody.  For instance, if you have alcohol dependence or addiction to alcohol or other substances, certainly this is a really, really bad idea for you.  And as a doctor, I see people all the time who drink 7 drinks on a Saturday night, thus averaging out to one per day for that week.  Sorry, doesn’t work that way.

7.   Engagement in spirituality or religion

This is a common theme in the Blue Zone communities.  People who live to 100 typically are part of a spiritual community of some sort.  And they aren’t hit-or-miss about it – they show up several times per month for some sort of spiritual connection.

I was in Jerusalem on Yom Kippur last year.  Talk about honoring the holy days – the entire city shut down in what seemed to me a collective nod to the spiritual.  And my Muslim friends pray faithfully many times a day.  And Christians like the Adventists of Loma Linda reverently keep the Sabbath.  Just examples – your faith traditions may be vastly different and that is OK, but the idea of regular spiritual engagement as a factor in how long you live – well that intrigues me.

Communities in which people live to 100 tend to be very family-centric.  They take care of both their children and their aging parents.  Old people are honored in the family.  It turns out that taking care of your family makes you live longer.  A good read about this is Atul Gawande’s Being Mortal.  I recommend it.

Isolation isn’t good for you.  That seems to be clear.  This makes sense to me – particularly in our culture where our “friends” may well be people we barely know on our social media accounts.  Watch the TedTalk that I referenced earlier in this post and learn of the close-knit group of people in Okinawa who are life-long companions throughout the life journey of the group.  Through good and bad.  Wow.

When I was in medical residency we had a group of friends that hung out regularly to de-stress, commiserate, laugh.  We called ourselves the “Plexus” a name whose origin is a long and probably boring story.  Meghan Walsh was part of the Plexus.  But the group sort of scattered after our residency at Hennepin County Medical Center though some of us have stayed in touch.  Our friends come and go sometimes.  Not a good thing, perhaps. 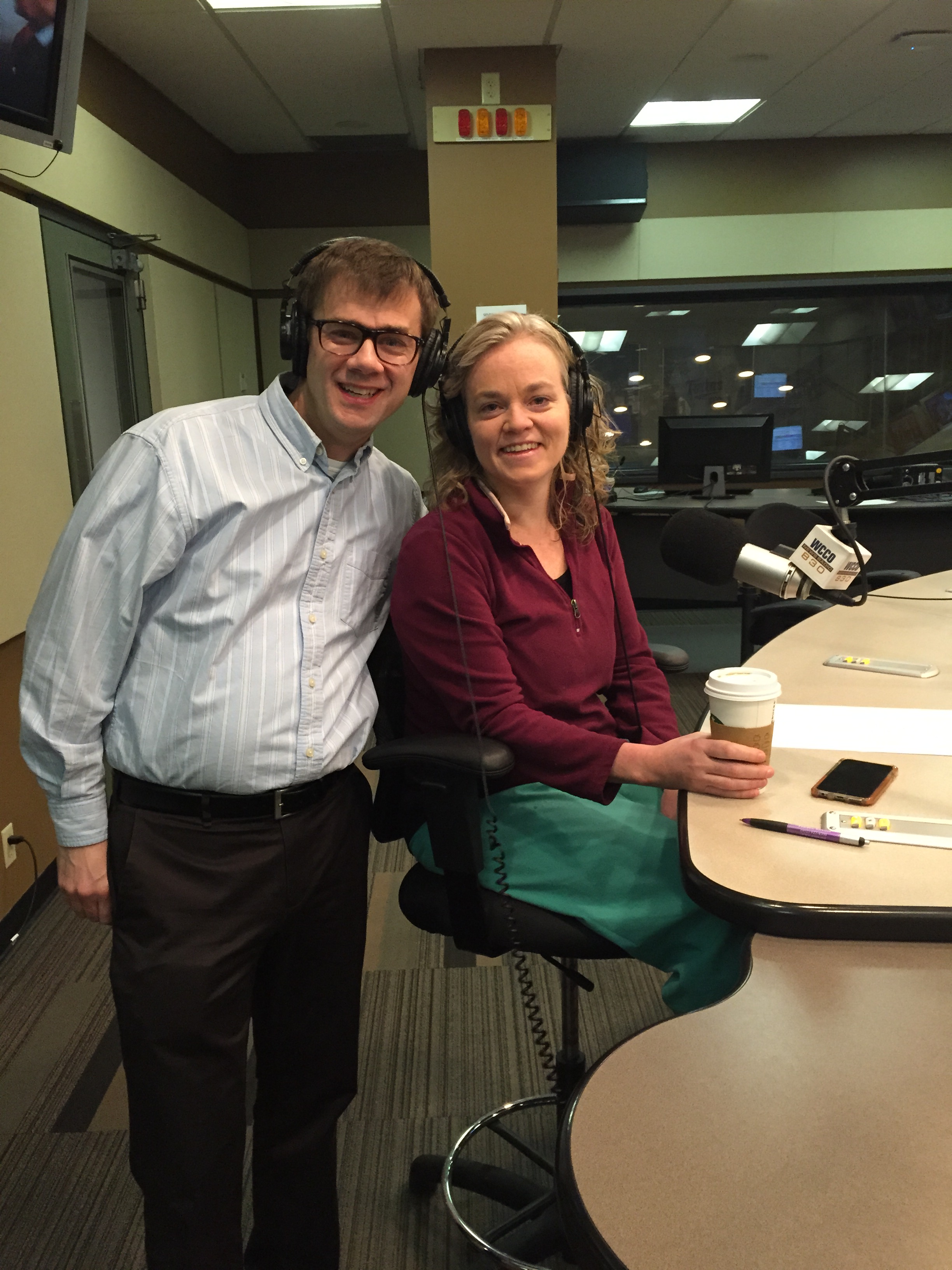 OK, as promised . . .  what is procreative success?  Sounds like something good, eh?

According to Dan Buettner, this is the genetic goal, if you will.  It means that we are programmed to see our children and our children’s children and if we do, that’s considered success, at least evolution-wise.  So all this longevity talk – well, evolution and our genes have little to say about that.

So look to the Blue Zones for help.