Famous people get colon cancer and so can you 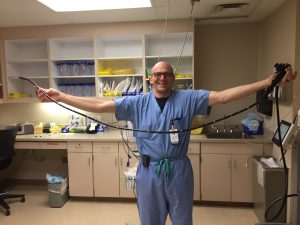 Hey, everybody.  March is Colon Cancer Awareness Month and we’re going all in (bad choice of words when talking about colonoscopies, perhaps) here at Healthy Matters.

Here’s a guy you should meet

Check out my guest from the March 5 Healthy Matters radio broadcast: 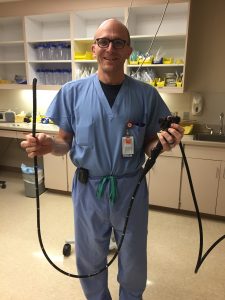 That’s Dr. Jake Matlock.  He’s a gastroenterologist at Hennepin County Medical Center and one of the best in the business at treating your various intestinal problems, among them colon cancer.  He is an expert with a variety of scopes and skilled at what we call “advanced endoscopy” which means if anybody can get a scope into some dark and remote part of your innards, Jake can.  He’s also a great teacher and “explainer of things.”

He was good enough to let me into the GI Lab where he works where I snapped a few pictures.  Yes, that’s a real scope.  It’s not as long as it looks.  Yes it is.  I lied.

So I’m fired up to have Dr. Matlock on the radio broadcast tomorrow (March 5).  If you missed the show, the podcast will be available here so you can listen on your own device on your own time.

Jake and I did residency together quite a few years ago.  I remember him as being the one who made us all just a little less anxious when he entered the room – he’s smart, good with a scope, and a good guy overall.  You just get the sense that your patients are in good hands with him.

In my last post about colon cancer, (which again, you can visit by clicking here) I described the why and how of getting checked for colon cancer.  That post has lots of information, including the various types of tests you may consider.  Be sure to read that post if you want to know more.

In this post, I won’t give any more medical information about colon cancer.  Rather, I’m going to do something completely different and simply show you a few well-known folks who had colon cancer.  Some of them died from it, others got test, treated, and are still going strong today.  I think it is sort of interesting.

I’ve included a fact or two about each that I didn’t know but I found cool.  I hope you do as well. 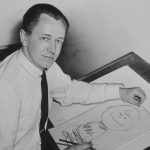 The Minneapolis native and creator of Charlie Brown, Snoopy, and the gang had been having a serious of strokes from blood clots in his aorta.  As part of his medical evaluation, they discovered colon cancer which had already spread into his body.  You see, the presence of a malignancy (cancer) makes a person’s blood form clots more readily.  I don’t know the details in Mr. Schulz’s case, but a big ‘ol clot in a huge artery seems like it was caused, in part, by the cancer.  So the stroke could actually have been a manifestation of the cancer.

He died on February 12, 2000 and the last original Peanuts cartoon was published the very next day.  He made it clear that he never wanted anyone else to draw his characters after he died.

Probably the greatest coach in the history of football, or maybe any sport, the great Vince Lombardi died of colon cancer when he was just 57 years old.  He apparently said to his priest when near death that he regretted not having accomplished more in his life.  Guess all those national championships weren’t enough! 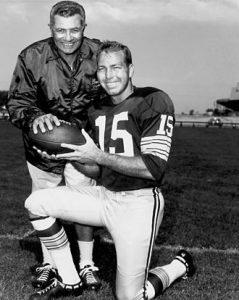 I didn’t know this:  Coach Lombardi demanded acceptance of everyone in his locker rooms, especially gay football players (he had a gay brother).  In a book, his son said his father would “tolerate nothing but acceptance” on his teams.  What an example from a true American icon – even back in the 1960s.

That’s the coach with Bart Starr.  And though I’m a Minnesota Vikings fan now, I was born in Wisconsin and my mom has a picture of me as a toddler with a “Put me in, Vince” sweatshirt on. 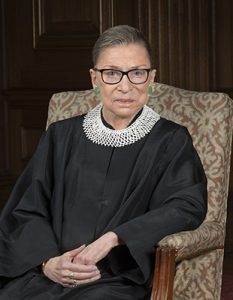 From US Supreme Court, public domain

Yup, “Notorious RBG” (a name I just love) was diagnosed with colon cancer in 1999.  She underwent treatment, including chemotherapy and radiation.  And get this . . . after all this she embarked on a new strenuous fitness program.  By her 80th birthday, RBG could do 20 pushups.  She is so dedicated to her workouts that she calls her personal trainer the “most important person in my life” (since her husband died).  Apparently this workout would challenge someone half her age.  Go get ’em, RBG!

Want to know more about RBG and her workout?  Check out this piece on Politico.  It’s a great read!

And RBG is still going strong, even after she had a second cancer, this time pancreatic.  I want to be like her in so many ways.

From her birth on a cotton plantation in South Carolina, Eartha Kitt became a national treasure.  Singer, actor, activist.  You know the song “Santa Baby”?  That was Ms. Kitt.   She won three Emmys for her acting and she played Helen of Troy under the direction of Orson Welles.  You know the song “C’est si bon”?  Listen to Eartha’s version here:

Eartha Kitt was much more than the woman Orson Welles called “the most exciting woman in the world.”  She also was a social activist and became involved in issues ranging from working with inner city kids in Los Angeles to peace issues to LGBT rights.

I love the music of Debussy, even though I still remember struggling to learn “Clair de Lune” like so many people learning to play piano.  Our son, Alex, can play “Prelude to the Afternoon of a Faun”  – well at least he used to be able to (still practicing the piano, Alex?)

Debussy was a French composer in the late 19th

and early 20th centuries and he wrote sounds that not many had heard before.  But don’t call him an “Impressionist” – he hated the term!

Listen to Clair de Lune while reading the rest of this post:

Debussy was diagnosed with rectal cancer (a type of colorectal cancer) in 1909 and in 1915 he underwent one of the first colostomy procedures ever attempted.  It didn’t go well and he was in quite a bit of suffering when he died at the young age of 55 in his Paris home during a German aerial bombardment.

You know who else had colorectal cancer . . . ?

You can get this done.  If you missed my overview of the ways you can get tested for colorectal cancer, see my earlier post by clicking here.  It’s not as hard as you think!