Do you need a mammogram?

I wrote this post about 4 or 5 times.  The first draft found me in the weeds of details and statistics.  In the second draft I sounded too preachy.  My third attempt covered every aspect of breast cancer from risk factors to diagnosis to treatment and was waaaaaaay too long.   I just couldn’t seem to get it right.

Then I realized that breast cancer is a multi-headed beast.  It has technical clinical aspects.  It has emotional overtones.  It has a definite gender angle that I, as a man, really cannot fathom.  It has controversy.  It is scary.

It is just too much to cover in one blog post, ergo, my troubles in writing about it.  So I’ve decided to talk about a single aspect of breast cancer – that being the role of mammography in screening.

I know people with breast cancer.  I bet you do as well.

I know so many people in my life (not just my doctor life, I mean my real life) who have or have had or did have breast cancer.  It is really sobering.  Really close friends.  Several women from my church congregation.  Relatives.  My own mother-in-law.  Wonderful strong women all of them.

This Sunday on Healthy Matters (my weekly health and wellness radio show) we talked about breast cancer screening with the major focus on mammography as the single most effective screening method available.  In this post I will cover:

Thanks for joining me.  Let’s learn something together . . . 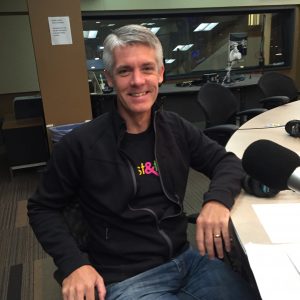 First of all, meet Dr. Tony Severt.  He is a colleague and friend of mine from HCMC (my professional home in Minneapolis) and the Assistant Chief of Radiology.  He joined me in the WCCO studios for our live Healthy Matters broadcast to talk about mammograms and other ways to detect breast cancer.

As a doctor, I can tell you that Tony is a great guy to know.  He is my “go-to” guy whenever I have questions about an x-ray, a CT scan, an MRI, an ultrasound – you name it.  All that advanced imaging that doctors do is actually the realm of radiologists who interpret the images, put it in the context of an individual patient, and educate both patients and doctors like me.  And Tony is as good as they come, always willing to talk me through what he is seeing for our patients.

So if you missed the show, here’s the podcast to listen to at your convenience (click the logo):

I also didn’t know how accessible mammography can be.  At Hennepin (my health care system), mammography is available all over the place, at the downtown campus and at a bunch of neighborhood clinics.  And whether or not you need a mammogram now, click here for more info about mammograms from Dr. Severt and his crew.   It’s a good read.

You can even schedule your mammogram online via MyChart. 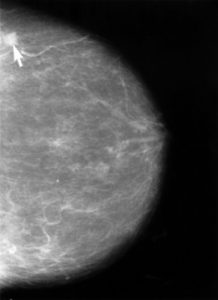 Photo:  Public domain via NIH. Arrow pointing to a cancer.

Here are some practical tips we learned from Dr. Severt about the newest 2016 guidelines for who should get a mammogram according to the American Cancer Society:

But Tony also talked of the controversial nature of the guidelines.  in fact, other professional groups have different recommendations.  For instance, the American College of Radiology recommends annual mammograms to all women starting at age 40, while the USPSTF (US Preventive Services Task Force) recommends mammograms every two years for women starting at age 50 (with an individual decision for women age 40-49).

And when to stop getting mammograms?  That’s a whole different point of contention. Many guidelines recommend stopping at age 75, but others say to continue getting mammograms as long as you have at least 5-7 years of expected lifespan regardless of how old you are.   As if you actually know how many years you have left!

Clear as mud, eh?  You could be forgiven for asking at this point, “If the experts can’t agree, what should an actual woman do?”

What is a screening test?

A screening test is a medical test (for instance: mammogram, colonoscopy, PSA, Pap test) which is intended to find a disease in a person without any symptoms, basically while there is still time to do something about it.  When you think about it, screening is a relatively recent concept.  In 1850 nobody was going around doing medical tests on healthy people.  But now we do it all the time.

So a screening mammogram is looking for a disease (breast cancer) in a person without symptoms (no lumps, breast pain, skin changes, etc).

Aside:  As Dr. Severt said on the radio broadcast, a screening mammogram is different from a diagnostic mammogram.  If you have a symptom, say a palpable lump in your breast, you are no longer in the realm of screening.   You are in the realm of diagnosis.

But what makes a good screening test?  Bear with me, this verbal detour about screening will hopefully help us understand why there is controversy in the guidelines.

Off the top of my head, I recall being taught in medical school that for a test to be a good screening test, a few things must be true:

Breast MRI for screening purposes fails #2 for the general population (but it has a place for higher-risk women).    Men are not screened for breast cancer because if fails #1 (it is not common enough).  You get the idea.

But mammograms for breast cancer meet all these criteria.

So if mammography is a good screening test, why the controversy?

One risk is radiation.  As Dr. Severt acknowledged on the show, every mammogram exposes a woman to a bit of radiation.  It is a very small dose of radiation but it is radiation nonetheless.  And the earlier a woman starts getting mammograms (like at age 40) and the more often she gets them (annually vs every two years), the cumulative dose of radiation can add up.  We had a caller to the show bring up this very point (thanks, caller!).

Most experts agree, however, that the radiation risk is so low that it is worth it to get the benefit of finding such a common problem as breast cancer.  If you want to learn more about this, here is a neat reference chart about radiation from a variety of sources, including mammography.  See the part where it says a 40-year old woman has a 1 in 70,000 chance of dying from the radiation from mammography?  Compare that to the (much higher) risk of breast cancer and it puts the radiation risk in perspective.

So radiation risk, though not zero, is probably not something to worry too much about.

Another downside deals with the call back issues.  My daughter is an actor and she loves it when she gets a call back after an audition.  But we’re talking about a different type of call back here.  Most women reading this are familiar with the letter you get after your mammogram (or the call you receive).  Most of them are thankfully along the lines of “all is well” and nothing further needs to be done.  But some of these letters report that the radiologist saw something that needs a closer look.  So the woman is “called back” for more tests.  That may mean additional images to get a better look (a diagnostic mammogram).  It may mean an ultrasound of the lesion in question.  It may mean a needle biopsy if a definite lump is seen.

The call back doesn’t mean you have cancer.  It just means that the radiologist saw something that requires a further look.  Dr. Severt told us on the air that most of the time the additional tests turn out reassuring.

But all of this understandably leads to a great deal of worry in the women who receive them.  And anybody who minimizes the very real feelings that a woman may have when she gets such a “call back” is missing the point.  It is a very real thing!

And not only the anxiety-inducing bit, there is also the cost and risk to the woman bit.  Additional x-rays and ultrasounds, additional doctors visits, biopsies that add a (admittedly very small) risk to women – well these should be minimized as much as possible.

So the guidelines attempt to balance the critical need to find breast cancers early without overdoing it and bringing millions of women back for unnecessary tests.

Are your breasts dense?

The last issue about mammography is one that came up many times on the show last week, and Dr. Severt expertly addressed it.  Breast density.

All you women out there who have received that letter after your mammogram have also received (or should have received) the notice about how “dense” your breasts are.  Radiologists in Minnesota, and just about all other states I think, are required to report to you how dense your breasts are.  This is because dense breasts look more white on mammograms, and less dense breast tissue looks black.  Guess what color a cancer is?  White.  So it is more difficult for the radiologist to see a white cancer on a white background.  This means that if your breast tissue is dense, the chances that a cancer could have been missed is higher.  That’s why they give you that information.

To illustrate, look at these two mammograms side by side: 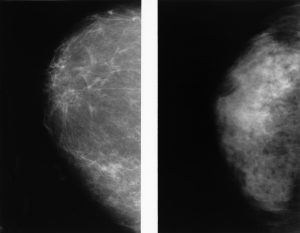 A fatty breast and a dense breast. Photo public domain

The mammogram on the left is from a 59-year old woman and is mostly fatty (grey and black predominate).  The one on the right is from a 39-year old woman whose breast tissue is more dense (lots of white in the background).  Remembering that a cancer will look white – it becomes easy to see why dense breasts present a challenge to the radiologist.

Which leads to the last part of the controversy.  It goes like this:

So the guidelines on whether younger women (those under age 50) tend to vary for these reasons.

OK this next part is just my opinion.  All this discussion is well and good and maybe helps us to understand why the guidelines differ on mammography.  But I can’t help but come down on the side of those who favor more women getting mammograms and I said as much on the radio broadcast.  When I consider all the risks and downsides of mammography, it all seems less significant to me than the risk and downsides of getting breast cancer.

I know, easy for me to say.  As a guy I’m not the one having to squish my breasts between those plates on the x-ray machine!  I’ve asked the women in my life what that is like and they all seem to give me that “you have no idea” look.  So I sympathize, I really do.  But those same women all say they wouldn’t dream of missing their mammogram.

And as I said at the top of this post, I know a whole lot of women who have been diagnosed with breast cancer simply based on the mammogram.  And although some had pretty scary cancer and didn’t make it, most of them are alive and well today, survivors of their breast cancer.

So my take?  Get your mammogram.

Thanks for reading.  Subscribe by e-mail if you want.