Concerned about allergies? Maybe you should feed your baby some peanut butter

OK, first off that is a delish-looking bowl of peanut butter in this picture.  And I love peanut butter.  Especially on a banana.  Anybody else put peanut butter on bananas?  Or apples?  I put it on both!

But I digress before I’ve even introduced the topic of this post . . .

There is new information about peanut allergies that I think is important to know – especially for parents of young kids.  So this is a post about reducing risk of developing peanut allergies in kids.

There is a new study called LEAP (Learning Early About Peanut) from the United Kingdom that I want to pass on.

The punch line of the study:  you probably should feed your little ones peanut butter. I mean really little ones – like as soon as they are eating solid foods.  Doing so may reduce the risk of future peanut allergies.

Food allergies are a real thing.  Most of us know someone, usually a child, with an allergy to some food or another.  Peanuts are the common one that I always think of (especially when eating peanuts while flying in an airborne petri dish called an airplane).  For some people, peanut allergies are a nuisance.  But for many, the reaction to peanuts (or some other food) is more than that – it is a serious situation and maybe life-threatening.

Food allergies on the rise

And kids are being hospitalized more and more with allergy illnesses: 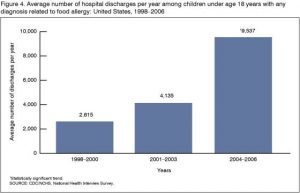 So wouldn’t it be great to reduce the risk that your child gets a food allergy? 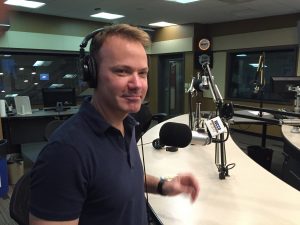 Click on Dr. John Sweet above for more information about his Allergy practice

We learned from my friend, colleague, and really good allergist Dr. John Sweet about allergies this past week on the radio broadcast.  We covered an awful lot of allergy related material so I encourage you to listen to the podcast by clicking on the logo below.

We even learned, live on the radio, that my wife thinks I don’t vacuum the floor in our house often enough.  (You’ll have to listen to hear about that!).   And we learned that eating dirt may not be so bad.  There was even a shout-out of support for growing up on a farm!  It’s always a good show when John joins me.

Just about a month ago I did another post about seasonal allergies which you can check out.  Dr. Sweet features in that post as well.  But this time I want to focus on one allergy topic that John talked about on the air this week – preventing peanut allergies.

LEAP-ing into a bowl of peanut butter

The new study I referenced above is called LEAP.   This scientifically rigorous study found that exposing your infants to peanut products will reduce their chance of developing a peanut allergy later in life.  And the risk reduction is big.

Here’s how the LEAP study worked . . . babies between 4 and 11 months of age were put into one of two groups.  Kiddos in one group were given peanut products and the others were given a diet without peanuts.  In the group who avoided peanuts, ~17% developed peanut allergies by age 5.  But in the group of babies exposed to peanuts early in life, only ~3% developed allergies.  That’s a big risk reduction.

Here’s a snapshot of the data (source is the NEJM – link below). 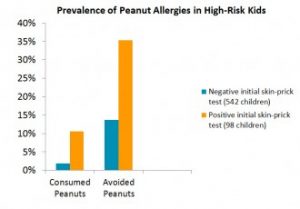 And it makes some sense.  After all, an allergy is your immune system doing an over-zealous job of attacking substances (called allergens) that it thinks are foreign.  If you have never encountered a substance early in life, perhaps your body mis-identifies it as an invader later on.  But if your body has been exposed to something like peanuts, from an early age, it learns not to worry about it later.

Here is the official publication of the study in the New England Journal of Medicine.

For more information about food allergies in general, check out this page from the American Academy of Allergy Asthma and Immunology.

And the blog from Seattle Mama Doc (Dr. Wendy Sue Swanson) is a terrific source of medical info from a mom and a pediatrician.  I met her once when she gave a talk at HCMC (my hospital in Minneapolis).  She has a post about peanut allergies.

One other important comment from the LEAP researchers is that babies shouldn’t be given whole peanuts due to the choking hazard.  Good to remember.

But creamy peanut butter for your 6-month old?  BRING IT ON.