On a recent “Open Lines” radio broadcast (in which we have no topic and I simply answer the sundry questions from listeners) somebody asked about the health benefits of apple cider vinegar.  Fair enough.

Well as a highly educated medical professional I am here to firmly and unequivocally state after my extensive exposure to the best in medical science that I know nothing about apple cider vinegar, whether it be the health benefits or culinary benefits or counter top cleaning benefits. 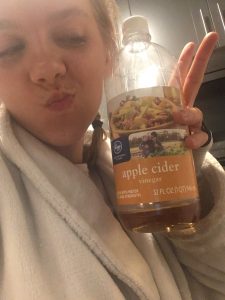 But happily, I’m not 100% ignorant about apple cider vinegar any longer.  Just about 90% ignorant. That’s since my daughter introduced me to the stuff while I was visiting her far from home at college.  Here’s how it all went down.  I was having some queasiness in my belly or some such thing and she goes to the cupboard and pulls down a giant bottle of ACV (apple cider vinegar = ACV).  Then she starts telling me all about how ACV improves everything from colds to upset tummy to sunburn and cancer and everything in between.  But she does live in Los Angeles so I naturally wondered what the crazy Californians are teaching my level-headed Midwest-raised daughter.

But I was game to give it a try.  So  we poured some ACV into a glass of water, I held my nose, and drank it all down.  It wasn’t too horrible to drink so that was a plus.  And dang if my stomach queasiness didn’t get a little better!

So I chalk up my rapid improvement to one of two possibilities:

Placebo effect – I convinced myself that it helped because I wanted it to help.

So in the spirit of hard-hitting investigative journalism and to be true to my medical credentials and only stick to the best science, I’ve done some looking into ACV as a health option.  Here’s what I found:

If you Google it, you will find a huge list of conditions for which ACV is supposed to help.  Among the claims are (and remember, these are just claims by somebody or another, this is not Truth with a capital T):

OK so I had to stop after I got to this many potential benefits after about 5 minutes of Internet searching.  If you are curious, the claims for ACV go well beyond what I have listed here.  I think I saw that apple cider vinegar stops global warming and promotes winning seasons by the Minnesota Twins, but now we’re getting ridiculous.

Some of those claims may actually be true . . . at least sort of

I’ll be honest, whenever something in medicine sounds too good to be true, it probably is just that.  We all know that.  I mean really, if ACV was as effective at doing all the things people claim it does, the drug companies would be patenting it and selling it for a thousand bucks a bottle.

And anytime you Google something about medicine and health benefits and nowhere in the search results are you seeing reliable medical sources, it should cause you to pause before you believe everything you read.

But as my little story at the top of this post can attest to, there may be something to some of these claims.  And I certainly felt better after drinking a glass of the stuff.  So I’m keeping an open mind.

Here’s some of the claims from above for which I was able to locate some reasonably sound evidence:

As best I can tell, this claim has the best scientific evidence.  The idea goes that ingesting some ACV before eating a meal will help to keep glucose levels in the blood down by inhibiting absorption of starches.  There is some plausibility to this claim and I was able to find some reasonably reliable studies to back it up – though these are very small studies that don’t really prove anything.  So I guess the take-home is that there may be some benefit in controlling blood sugars but this is no way should take the place of accepted treatments for people with diabetes.

Does it help weight loss?

There is a bit of science to the claim that ACV may help keep your weight down.  But when I say “a bit of science” I mean a very little bit.  The theory is that vinegar gives you early satiety (it makes you feel full) so you don’t eat as much.  This in addition to the anti-glycemic effects (see previous paragraphs) and – presto! – maybe you’ll lose weight.

The science, however, is not conclusive at all.  I found this study which did find a bit of evidence for this effect, but the study was in 18 rats.   Yup, it may help keep some lab rodents slender but people?  We just don’t know.

How about the stinky feet issue?  Is there science behind that claim?

So despite my investigative attempts, I didn’t find anything conclusive about the stinky-feet relieving properties of apple cider vinegar.  What the heck is wrong with the medical community?  How come there are no multi-million dollar studies to help eliminate the scourge of smelly feet from the earth? 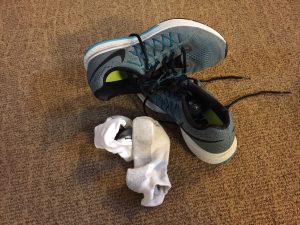 Step 1:   Here’s my stinky old running socks and shoes after working out.  I’ll leave it to you to imagine the smelliness of my feet. Let’s just say my feet didn’t smell like a field of lavender.

Step 2:  Then I swabbed my tootsies with some water with apple cider vinegar in a highly 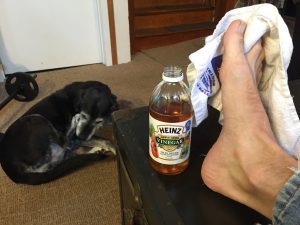 scientific process.  Here’s the proof that I actually did this, with my dog Zoe photo-bombing:

Well after the ACV bath my feet didn’t stink so much anymore.  They smelled like . . . well, like vinegar.  Not too surprising I guess.  But the rather anti-septic smell was sure an improvement so there’s that.

Maybe just wash your feet with soap and water.

Actually, yes.  There are some concerns that too much vinegar in your mouth will lead to tooth enamel erosion.  Makes sense since vinegar is mostly acetic acid and acid is rough on the teeth.

There is also concern that people with gastroparesis (delayed stomach emptying) may get worse belly symptoms if they consume ACV.

Look again at that list of benefits that have been attributed to apple cider vinegar.  Here’s what I think.  For serious chronic illnesses (like diabetes and obesity) I would stick to accepted and proven treatments.  Healthy diet.  Regular exercise.  Medically proven beneficial medications (especially for diabetes).  Don’t count on vinegar to cure your diabetes, or even effectively manage it.  It doesn’t cure cancer.

I did get some relief for my upset tummy with apple cider vinegar.  I think there is something to that.  And I know others that say it has helped sore throats and other minor nuisances.  For those reasons, go ahead and give it a try.  I doubt it can hurt and who knows, maybe it will help!

For a easy read on the subject which summarizes things better than I can, try this article.

This was just a quick look at something that intrigued me.  And if you Google ACV, you too will be bombarded by claims.  So let’s hear your own stories about apple cider vinegar.  Did it help you out in some way?  Leave me a comment below and share it with us!

And sorry I did not test out the jellyfish-sting-relieving properties of ACV.  I’m not that dedicated.