The stethoscope of the 21st century? 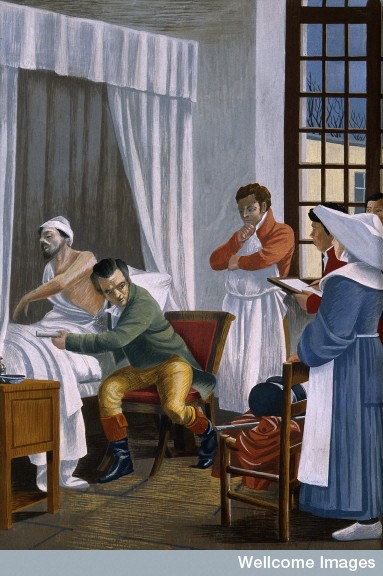 “That it will ever come into general use, notwithstanding its value, is extremely doubtful; because its beneficial application requires much time and gives a good bit of trouble both to the patient and the practitioner; because its hue and character are foreign and opposed to all our habits and associations.”

Such was the opinion of the stethoscope by an English doctor in 1821 named John Forbes.   The stethoscope had recently been invented by French physician René-Théophile-Hyacinthe Laënnec in an effort to protect the modesty of his female patients by removing the necessity of placing his ears directly against their chests.  The skepticism of Dr. Forbes notwithstanding, the stethoscope is now considered one of the greatest inventions in history.  Check out the patient of Dr. Laënnec at the left – head firmly pasted to the chest of this guy with tuberculosis.  Oh my!   (Since this patient was male, the good doctor did not need to use his new stethoscope invention).

Whether the doctor actually contracted tuberculosis I know not.

But in the year 2016, the stethoscope is so familiar to patients that we probably would wonder what was wrong if the doctor did not have one hanging around his or her shoulders.

So what is the technology that doctors will be using in the future?

The stethoscope is nearly 200 years old.  Although I doubt I’ll ever hang my stethoscope up for good, today we do have some newer tools to help with diagnosis.  The ultrasound, though a tool we have had for many years, has now hit the bedside.   Today I spent some time with my colleagues (inpatient doctors, or hospitalists) learning how to use portable ultrasound machines in our practice.  As a patient, you will likely encounter a doctor with an ultrasound in his or her pocket and you may wonder what the heck this is all about.

So this post is a sort of “mini-Medical School” into the use of ultrasound in clinical diagnosis – a brief look at how clinicians of today can use this tool in medical practice.

Most medical students are repeatedly taught that 80% of the diagnoses they make on their patients will be from the history and physical exam.  In other words, fancy blood tests, high-tech imaging (x-rays, CT, MRI . . . ) and other extensive tests are needed much less often than we all may think – perhaps just 20% of the time.  So we teach doctors-in-training to learn the skills of talking to patients and laying on of hands by doing a physical exam.  Most of us can recall some of our mentors and teachers, patiently and skillfully showing us the tried-and-true physical exam skills.

An anecdote from my training about one of the great ones . . .  I remem

ber Dr. Richard Asinger, here at HCMC, putting his stethoscope on the top of a patient’s head.  I thought he was messing with me, but he said he could actually hear a heart murmur up there.  I was in awe of this pure genius.  On the other hand, maybe he really was just messing with me!  He’s still at HCMC; I should go ask him.  On a side note, he’s also a killer dancer on the dance floor.

But even listening with our stethoscopes to hear abnormalities of the heart (murmurs, for instance, which could mean valve disease) , or of the lungs (like rales, which could mean pneumonia) it is still a bit primitive.  Sometimes we want to know how much extra fluid a person has in their body due to heart failure (called hypervolemia).  Or we need to know if they have a partially collapsed lung with air around it (called a pneumothorax).  Or if they have a blood clot in their legs (called a deep venous thrombosis, or DVT).

So that is where ultrasound comes in. 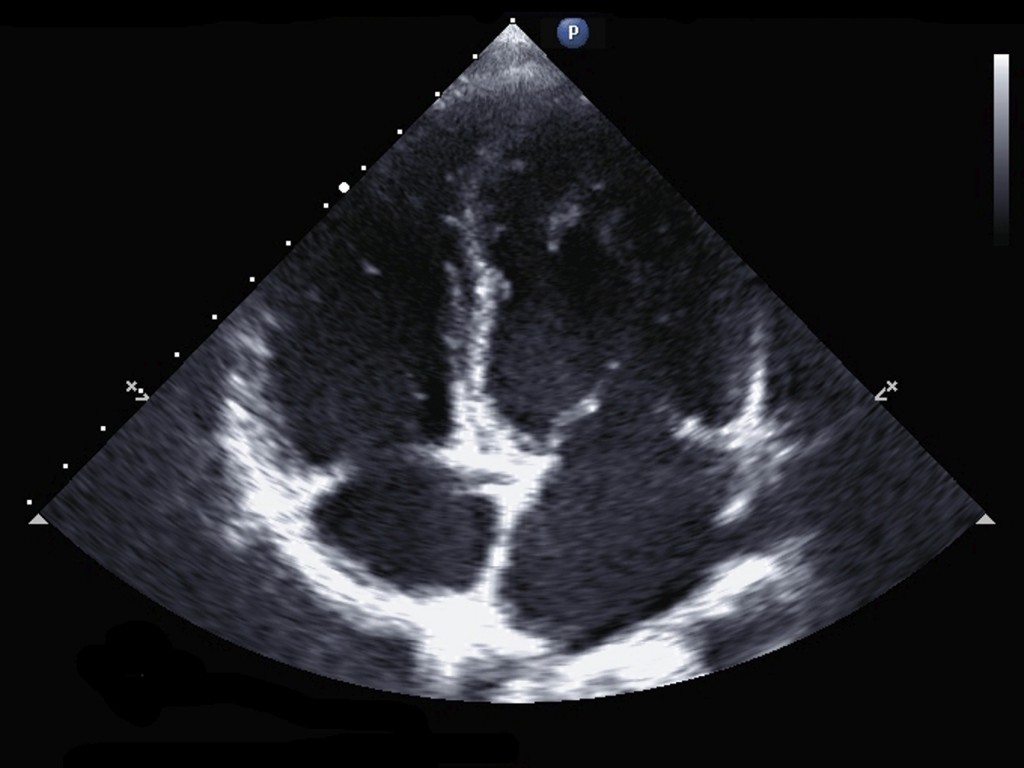 This is an ultrasound image of a heart.

If the chambers and vessels look big – maybe you have too much fluid in your body.  If the valves are not opening and closing correctly, maybe that is what is causing that murmur we hear with our stethoscope.  If the heart is not beating strongly, you may have heart failure.  So much information can be learned from these pictures!

Ultrasound training with the HCMC Hospitalists

I thought Healthy Matters listeners and blog readers may like to see how we stay competent in the medical profession – so here’s a sneak peek of our group at HCMC  learning to use ultrasound in our daily practice.  The technology is really neat.  The machine is just a bit bigger than your smartphone, so now we can carry them around in our white coat pockets.  I think you will see more and more of this when you are a patient – doctors pulling out teeny little ultrasound machines.  I have even heard that we will be able to use our smartphones for this purpose at some point.

Here’s my colleague, Dr. Mike Lawson – an HCMC graduate, all-around good guy, and Minnesota Vikings fan – recently returned to Minneapolis after a spell as a doctor in the Seattle VA Medical Center.  He’s really good at using ultrasound and one of the best teachers around so he was helping the rest of us become proficient at it. 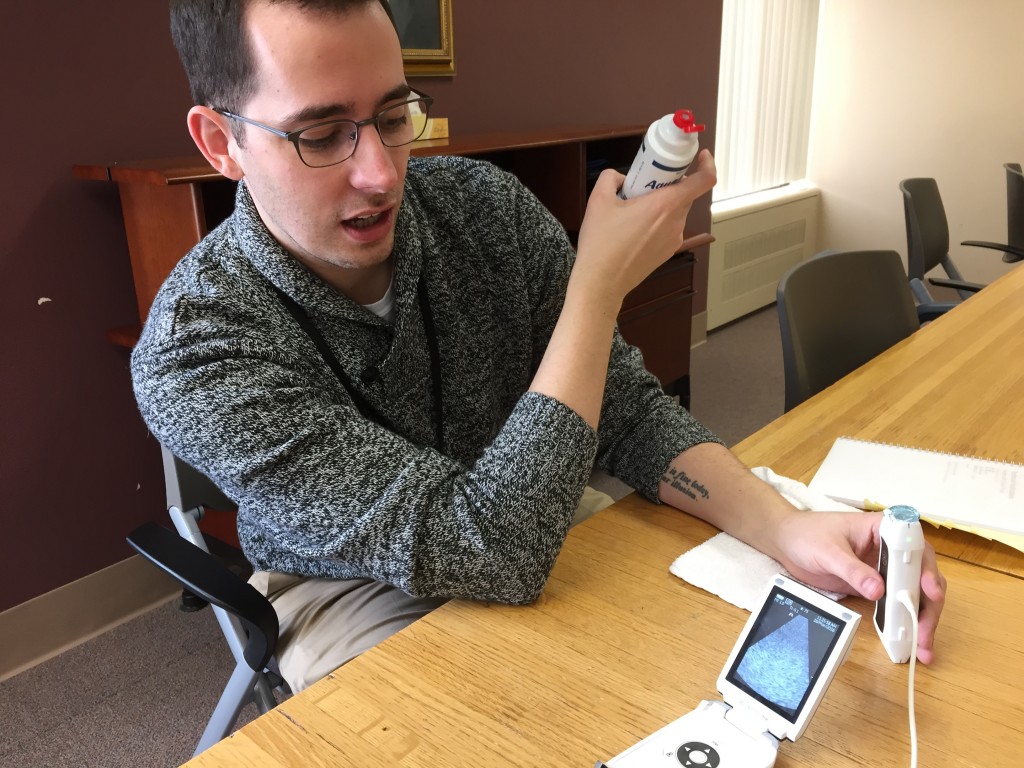 These pictures are of two of our outstanding clinicians working with the ultrasound machines (Chief Resident Dr. Marissa Durman on the left and Physician Assistant Erica Monroe at right).  Look at how tiny the machines are!  The doctors and PAs in our group were worried that they were going to have to do ultrasounds on pregnant women.  No worries – we have specialists for that!  Relief all around.

From putting an ear to a patient’s chest to listening through the tubes of a stethoscope to using sound waves on a portable ultrasound.

The centuries-long attempt to probe the human body continues.