Scenes from a frozen Minnesota lake 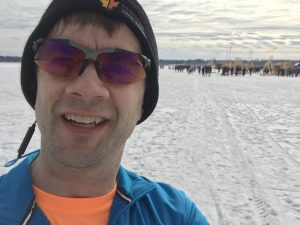 Hey.  This is going to be a weird post.

I went for a run today on a balmy January day near my home in Minneapolis.  Along the way I encountered frozen canoes by a lake shore, ducks swimming in a rare patch of open water, and thousands of people on a frozen lake – walking, swinging on gigantic wooden swing sets, biking, fishing, running, dressing up like butterflies, even standing in a circle while singing old hymns.  I saw guys running in shorts.  OK, that last part is not too weird, after all, it was 39 degrees today.  In Minnesota that qualifies as shorts weather in January.

Of course, I wore headphones playing a mix of Prince songs.  It was a terrific Minnesota kind of day.

Lake Harriet, the center of my universe 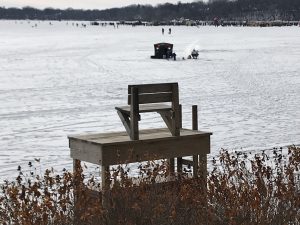 I have run and walked and biked around Lake Harriet in Minneapolis hundreds of times in my life.  I’m sure when Julie and I are little old people we will still be walking around this lake.  So today was like any other.  Except that it wasn’t.

Here’s the scene from my running path at Lake Harriet in Minneapolis, my home town.  Complete with lifeguard tower, people ice fishing, and a thousand people wandering around on the ice.

Turns out this is the opening of Art Shanty 2018, an arts and culture festival in Minneapolis.

I just love it that in the dead of winter I can run into an art show on a frozen lake.

To learn more about it, click on Art Shanty Projects here.

Playgrounds aren’t just for kids . . . or just for summer for that matter

Here’s the first thing I came across on the ice.  These big wooden swings had people lining up to try ’em out.  They’re like big wooden pendulums!  I wonder how thick the ice has to be to support ginormous wooden swing sets . . . 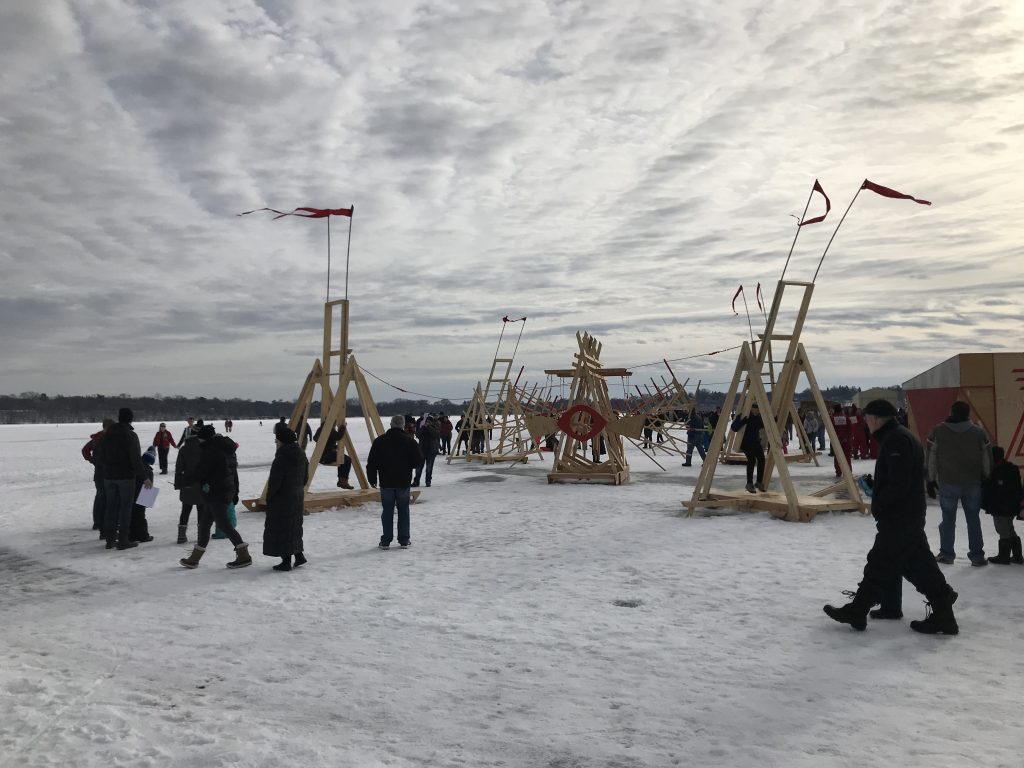 But never before have I seen people doing all three at once.  But look at these intrepid folks: 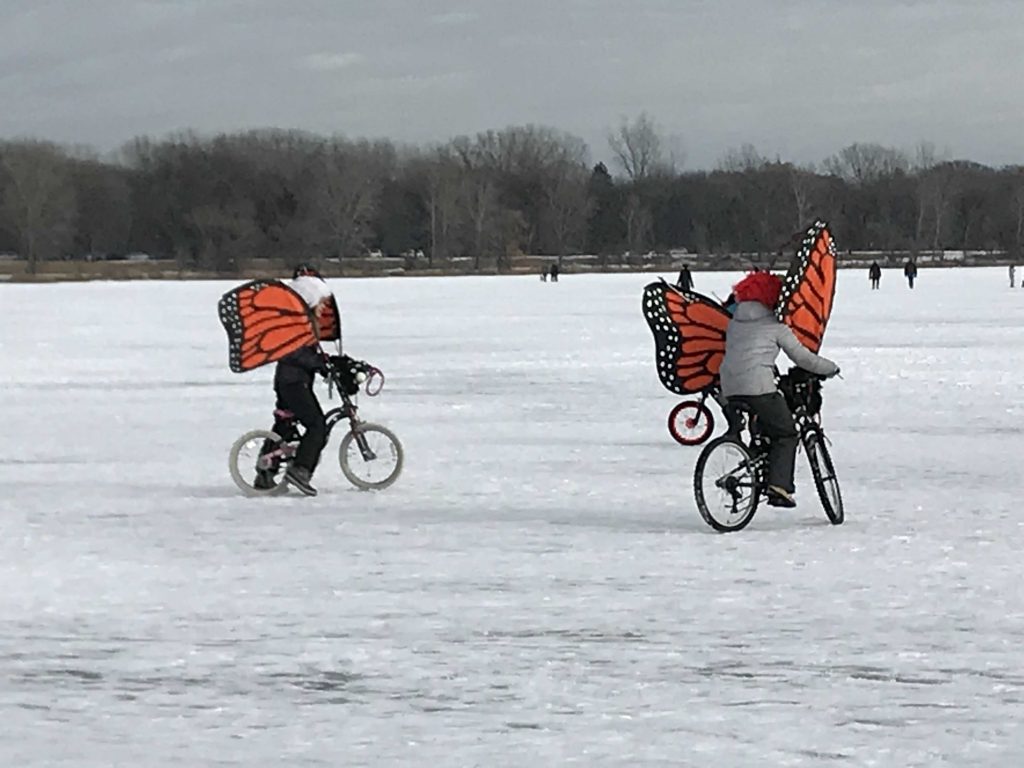 I have a HUGE thing for butterflies.  If you want to know why, read my earlier post here about my family’s trek up a Mexican mountainside to see a miracle of nature involving monarch butterflies.  And please, please, please do what you can to support butterfly conservation efforts.  Here’s a good place to start brought to you by our own University of Minnesota.

Canoeing is good exercise . . . OK, maybe not in January.   It’s a cool picture, though. 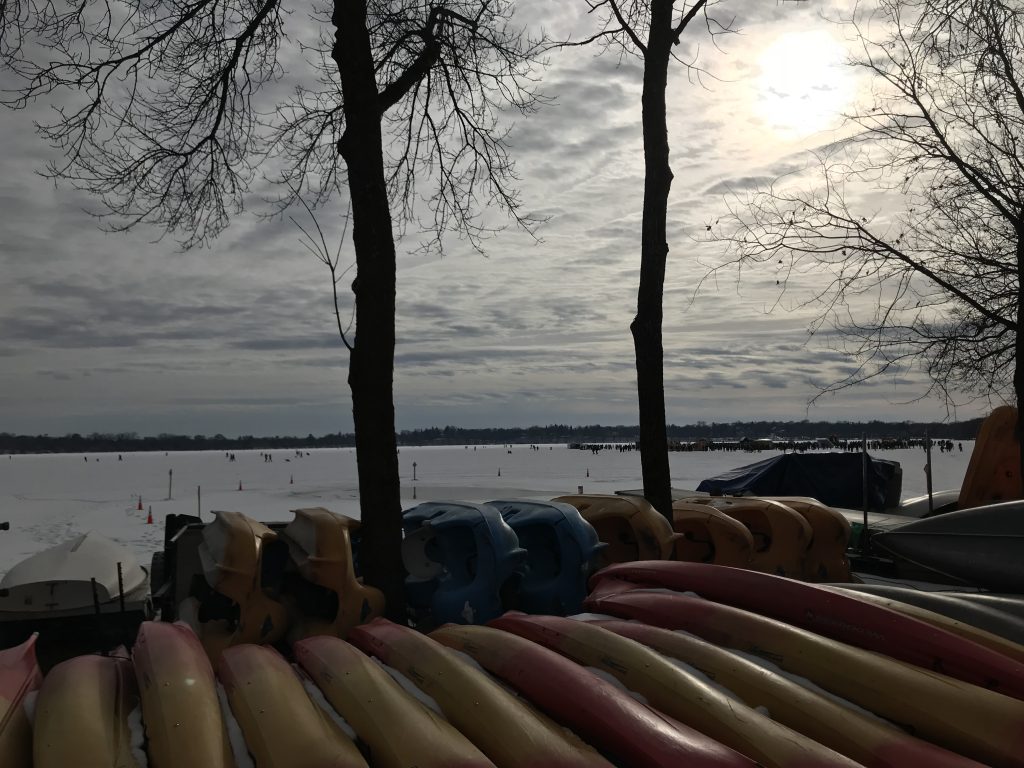 Back at the Art Shanty event on the lake, I found some rather quirky people.  Like these people, who for some reason are singing old hymns next to the “Tomb of the Unknown Minnow.”  Good grief.   There’s a giant fishing lure statue thingy with a bunch of people lined up to visit the Tomb of the Unknown Minnow.  With a choir singing something about “sons and daughters.”

Give a watch and listen here on my YouTube channel:

Anybody recognize the song they are singing?  If so, leave me a comment below because I had no clue what they were singing.

And whoever thought up the “Tomb of the Unknown Minnow” has my utmost respect.  Minnesotans take their fishing seriously, ya know.

Of course, there has to be an old guy ice fishing in the middle of it all

OK, I love this.  In the middle of a hipster art show on a frozen lake, there’s an old guy ice fishing. 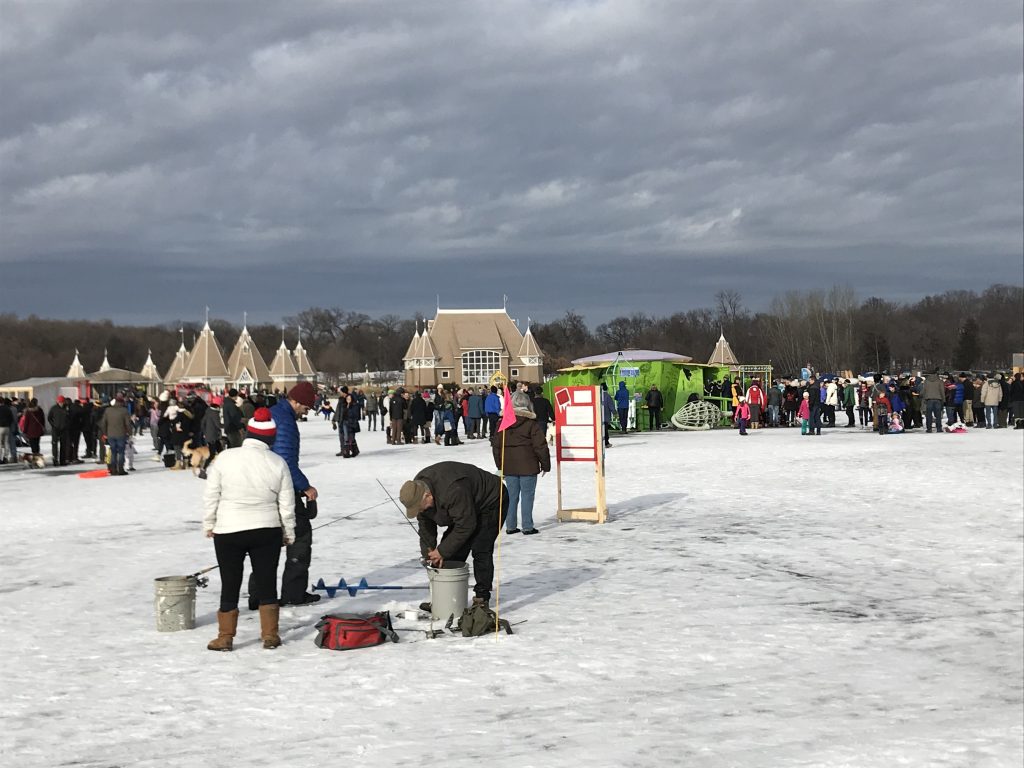 Here’s a Moby Dick I can relate to

So I’m still on the lake, but please excuse a bit of a digression . . .

Have you ever read Moby Dick?  Well, I have, and I think it sucked.

Did I just say that?  Melville’s epic novel of Captain Ahab and his obsession with hunting down the white whale has gone down as one of the greatest novels ever written in the US.  So I read it a couple years ago, in an effort to expand my outlook or some such nonsense.  So I’m reading Moby Dick and can barely get through the thing.  Good grief it was a laborious read.

So on Lake Harriet today, I come across this whale: 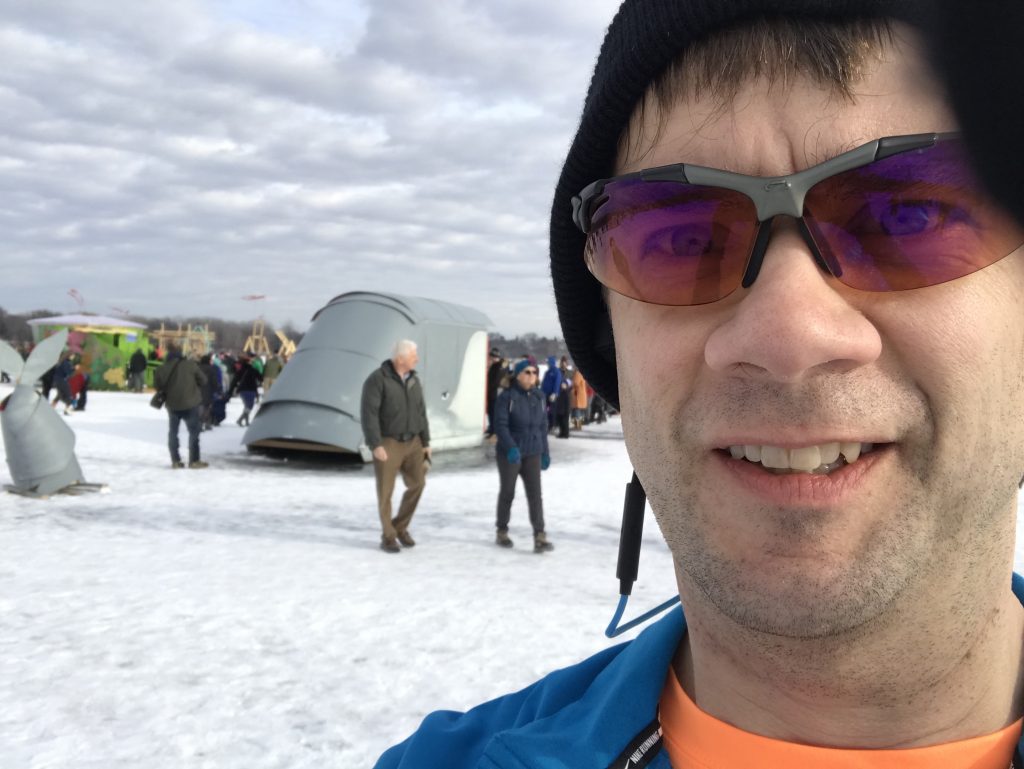 Yup, that’s a house on a frozen lake in the shape of a whale.

Hats off to the person who shovels this rink

You know what Minnesota people do in winter  . . . they play hockey!  I think most Minnesota kids learn to ice skate about a week after they learn to walk.  So that probably explains this scene on the lake . . . 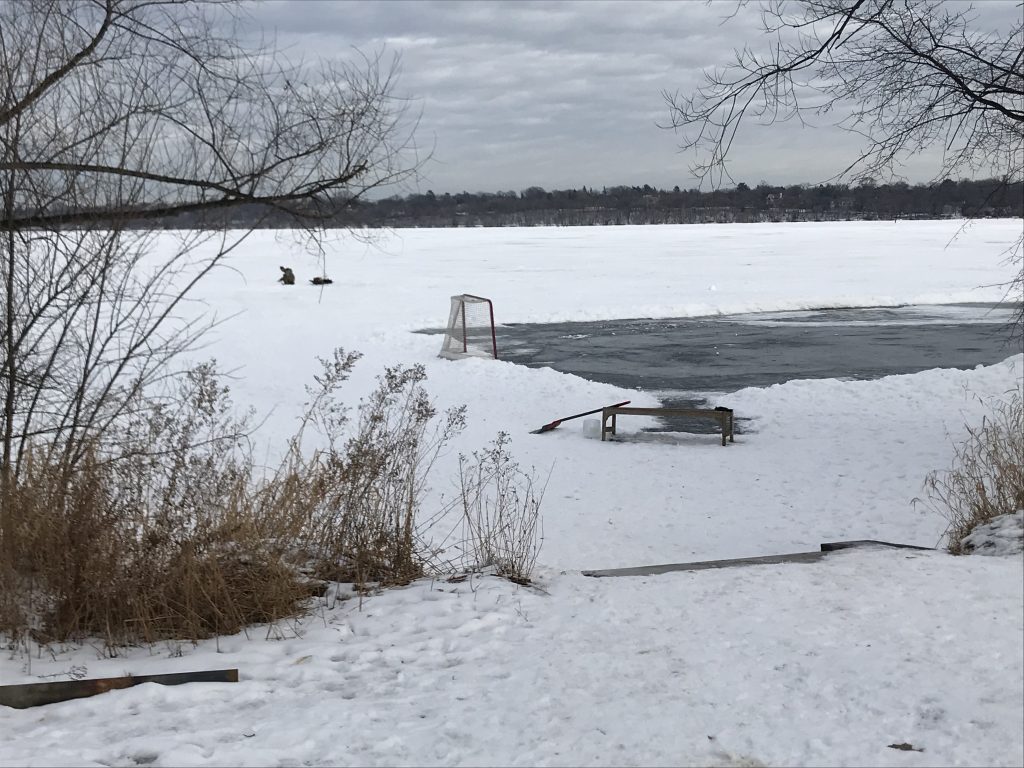 Even though Minneapolis is often ranked as having the best park system in the country (I can vouch for that!), some guy or gal who lives near the lake just shovels this little rink on the lake and puts some nets there on their own.  This happens all over Minnesota, on ponds, lakes, and front yards where people literally flood their yard with garden hoses to make homemade rinks.  I like that a whole bunch.

Which reminds me, how does one stay active in winter while avoiding falling on one’s hind quarters and potentially breaking one’s bones and bonking one’s head?

Hmm. . . well, I addressed that very topic in this post from a while back called “Staying active on the frozen tundra.”  (It was one of my first posts on MyHealthyMatters)

After leaving Lake Harriet, I ran across these guys:

There’s a stretch of Minnehaha Creek (the small tributary of the Mississippi River near my home) that doesn’t freeze in winter.  Must be fed by some underground thermal hot springs (in Minnesota, ha!).

The ducks are soothing to listen to . . .

I hope you had a good day today.  If not, maybe tomorrow will be better.  So this silly post was just an effort to show the joys of an ordinary day in the frozen North.  I hope you smiled once or twice while reading it!

I’ll do something more medical next time, but for now, happy winter, everybody! 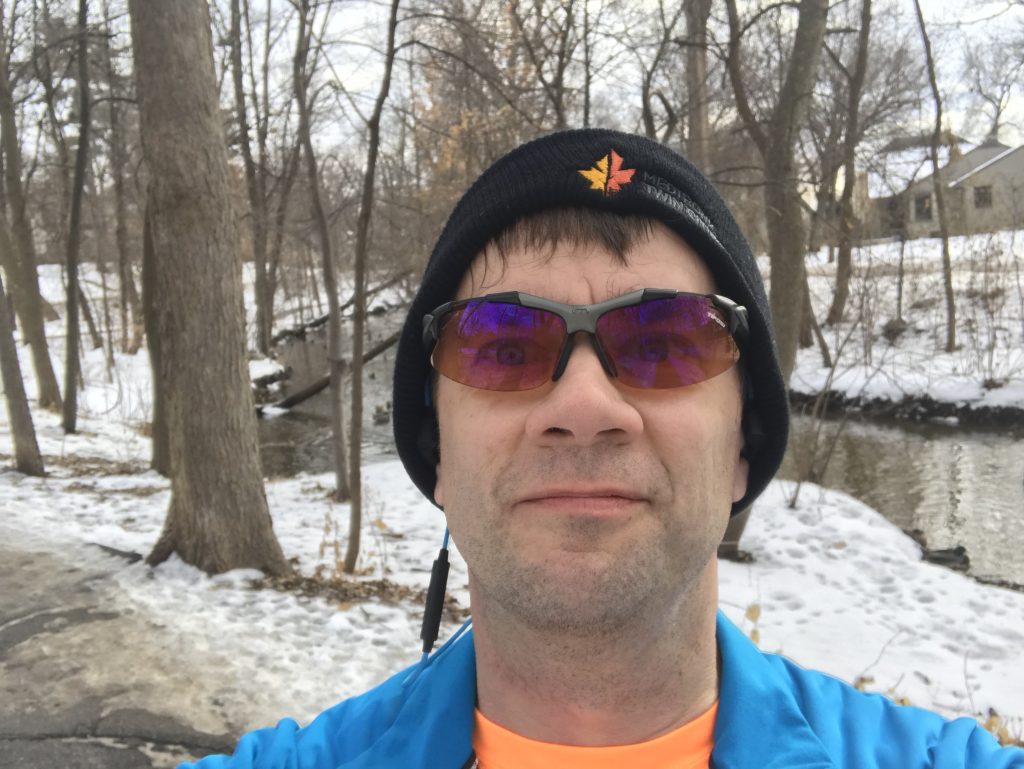