Saving your eyes during the solar eclipse 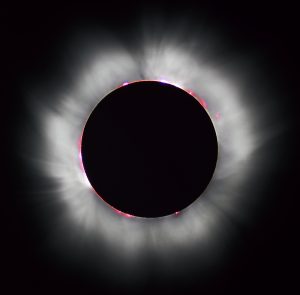 On Sunday I am driving 430 miles from God’s country (Minneapolis) to just south of Lincoln, Nebraska to experience the total eclipse of the sun.  That’s right, I’m driving to the area of “totality” along with about half the US population because it is a super cool thing to do.  I’m totally pumped up for it!

I think we need a natural wonder to take our minds off our human-made conflicts right about now.  And since this happens once every almost never, off I go with other adventurers from my family.

Now if only I could get a table reservation at a Lincoln restaurant.  I’ve tried.  It wasn’t easy.  I have also heard that it may result in the first traffic jam in rural Nebraska history, complete with shortages of gas and bumper to bumper traffic.  Yikes!

And don’t get me started on the saga of obtaining eclipse-viewing glasses.  First set was perhaps counterfeit which led to a search for safe glasses only to find the entire country is sold out of them.  But it all ended well as I did snag a pair of paper glasses for a mere ten bucks.

But this is a health and wellness blog, so I thought I’d look into the commonly-known advice to never look directly at the sun.  I’m channeling my Bill Nye the Science Guy in this post.

We all know not to look at the sun.  Heck, your mother could tell you that.  But why is this so? 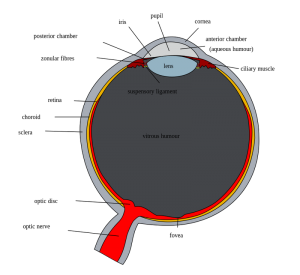 Because I am a nerd, I like to know how things work, so the next few paragraphs are my description of how eyes work.  Remember I’m a general internist, not an eye doctor (those are the real nerds), but this is my simplistic explanation.  If you are not a nerd and this is too much detail, you can click here to skip down to the part about why the sun can be harmful to your eyes.

When light enters your eye, the lens focuses the ray onto your retina, which is that thin translucent layer at the back.  The retina is where the light-sensing cells gather the light, convert it to electrical signals that get transmitted via your optic nerve (aka the second cranial nerve or CNII) to your brain where miracles occur and vision is perceived by your brain.

Your retina contains two main types of specialized neural cells called rods and cones.  These cells contain proteins called rhodopsin (in the rods) and photopsin (in the cones) which transmit a neuro-electrical signal through the cell and into your brain via the optic nerve.

Although rods and cones both absorb light and send signals to the brain, they have important differences:

Now it gets all chemistry-focused and since I barely passed chemistry in college and med school, I’ll gloss over this part.  After the rods and cones detect the light and the rhodopsin and photopsin proteins do their thing, all sorts of ions move around (sodium and calcium and potassium and so forth) and an electrical signal is sent up the optic nerve to the brain.

Voila!  You can see!

OK, now about the eclipse

This is, in my opinion, darn-near miraculous.  The eye is simply incredible.  So I want to protect it while I’m standing in a cornfield in Nebraska next Monday during the solar eclipse.  Let’s look into that part now.

To sum up why you don’t want to look at the sun directly, just remember this little stunt that many of us have done: 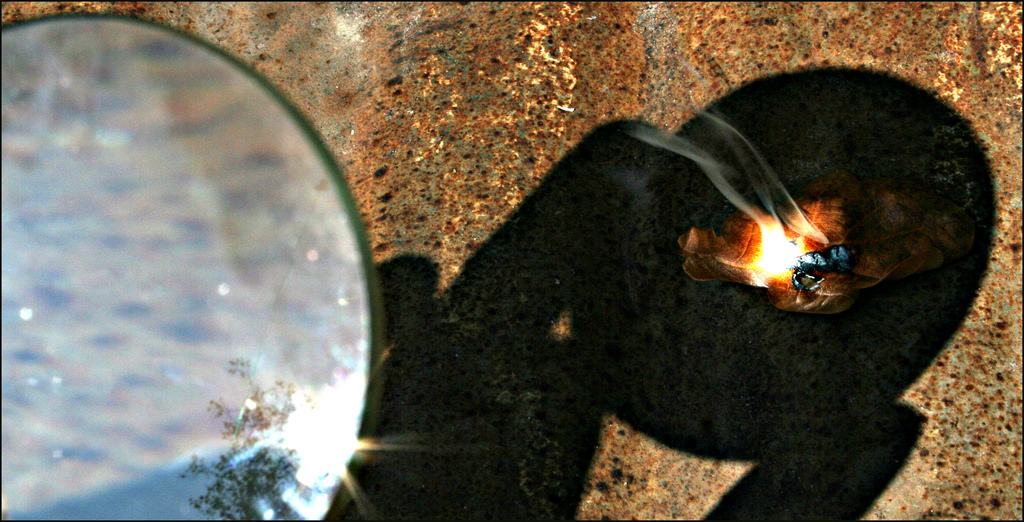 OK, now imagine you are a rod or cone cell at the center of that emerging flame.  Ouch! 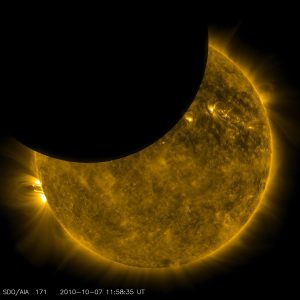 Our magnificent sun is really a giant fusion reactor generating a pretty much unimaginable amount of energy.  Ordinarily, when we are going about our lives, the sunlight is indirectly entering our eye.  Safe enough.  But if we were to look directly at the sun, the massive energy would be focused by the lens in our eye into a small area of concentration right on our sensitive rods and cones in the retina.

The result is the same as that picture above with the magnifying glass: a burn in the retina.  And since the cells in the retina are nerve cells, the damage heals very slowly or probably not at all.  It’s permanent.

Why doesn’t that happen every day?  Well, most of us would find it very uncomfortable to look directly at the sun so we just don’t ever do it.  We may glance at it in passing for less than a second, but that’s about it.  It is akin to touching a hot stove.  Your body won’t let you touch a hot stove for more than a fraction of a second.  Same thing with looking at the sun:  your body just won’t let you do it.  This is called an “aversion reflex” and is really important to keep the future of the human species secure.

But during an eclipse, we may get a false sense of security – hey, it’s DARK after all, right?  But not so fast.  Our desire to see the moon as it covers the sun in real-time may make us forget that any portion of the sun, even a sliver of it, can cause burns to our retina.

There are reports of people who literally have crescent shaped permanent burns in their eyes due to looking at the sun during an eclipse.  Burning your eyes is painless, so you won’t know it is happening.  That’s a real danger for people looking at an eclipse, thinking they are OK because it is just a sliver of sun they are seeing.

The good news is that for the ~2 minutes when the sun is totally eclipsed by the moon, you can look at it.

For more explanation and some helpful pictures, you may want to check out this page from space.com

Did you know that the only reason we have solar eclipse events at all is a mere stroke of luck?  The earth’s moon – our moon – is roughly 400x smaller than the sun, like this: 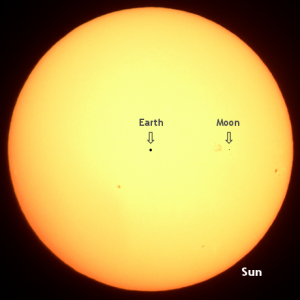 That little bitty moon sure doesn’t look bit enough to block out that giant sun.  But by sheer coincidence, the moon is also 400x closer to the Earth than it is to the Sun.  So when they line up, the moon appears to be exactly the same size as the sun, like this: 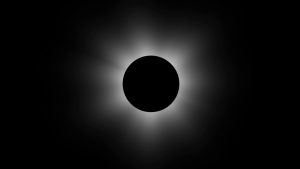 I spent way too much time on this NASA site for the best in eclipse information.  Check it out!

And if you have an eclipse-viewing story after Monday, August 21, leave me a comment here on MyHealthyMatters.org!