Dementia is not normal aging. It’s a disease. 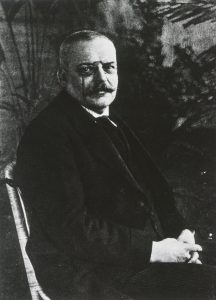 Hi, everybody!  I’m back after a bit of a hiatus for a bit of family vacation.  Thanks for checking in!

This week’s topic is dementia.  We talked about it with an expert colleague on our Healthy Matters radio broadcast and as I mentioned on the air, I’ll use this blog post to dig a little deeper into this expansive topic

Do you know who that is in the picture at left?  That’s Dr. Alois Alzheimer.  He’s the Bavarian doctor who had a patient, 51 year old Auguste Deter, who back in 1901 was in the Frankfurt asylum.  She was forgetting things and acting strangely – a condition he called presenile dementia.  Sadly, she was exactly the type of people who ended up in places like asylums at that time.  She was to become the first patient with what later became known as Alzheimer’s Disease, named for this doctor who found strange formations in her brain tissue at autopsy.  More on that later.

But rather than get into the science of dementia right away, I’d like to get you thinking about what dementia can look like on a more humanistic level.  Please check out this 3-minute video – it’s really poignant and tender.

Here’s what you will find in this post should you choose to read further:

I want you to meet a really cool doctor 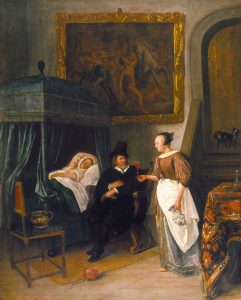 No not that guy at the left.  I want to introduce you to a friend who helped me out on the show about dementia. Dr. Abigail Holley dropped by the studio last week – and that’s her in the picture below.  She’s a terrific colleague of mine in our Division of Geriatrics at HCMC.

Abby has the coolest practice of just about anyone I know.  Some of the time she sees patients in the HCMC Senior Clinic at Augustana (clinic phone: 612-873-7410) in downtown Minneapolis.  The rest of her practice is quite literally making house calls.  Yup, folks, some doctors still do this!  I asked Abby if she looked something like the doctor in the picture at left – black bag and all.  She assured me that, no, she isn’t quite like that.  Rather, Dr. Holley and her nurse colleague, Sherree Dahl, hop in her car and visit patients as a duo.  A modern improvement on the guy in the picture above!  HCMC Extended Care manages her house visit practice (phone: 612-873-2723).

By the way, the best way to hear her talk about dementia is to listen to the podcast of the show by clicking here.  It is 35 minutes well spent! 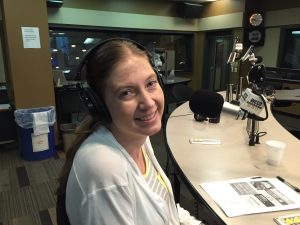 We learned that at home visits, Dr. Holley and Sheree can do a wide variety of services, such as:

And it is covered by Medicare!

One more thing about Dr. Holley that she may be too modest to mention but that I will gladly say – she was recently named one of only two geriatricians as a “Top Doctors – Rising Star” by Mpls-St.Paul magazine for 2016.  That was on top of already being named a “Best Doctor” for 2014 and 2015 by Minnesota Monthly magazine.

To put it bluntly, Abby is just really good with old people.

OK, enough introductions, on to dementia.

Often people use the term Alzheimer’s to denote any kind of cognitive dysfunction – which isn’t quite true.  In the most general terms, dementia is the condition where a person’s mental capabilities decline to the point where daily life is affected in some way.

Alzheimer’s Disease (no, not Old Timer’s Disease!) is the most common type of dementia but there are several others. As we learned on the radio broadcast last week, Alzheimer’s is a clinical diagnosis.  That means that there is no specific blood test, x-ray procedure, or other test that we can do to diagnosis it.  Rather, it takes a skilled clinician working closely with patients and their caregivers & family members to come to the diagnosis.

One of the first steps toward a diagnosis of dementia is to see your primary care doctor, where a screening test can be done to check for memory.  The Alzheimer’s Association has a worksheet that you can fill out ahead of time to help.  Check it out here.

Your primary doctor can then take that information and decide if further evaluation is warranted.  Since there are lots of causes of cognitive symptoms, it is important to rule out causes other than Alzheimer’s.  Things like medications, vascular disease (poor blood flow to the brain), or other chronic illnesses can lead to memory loss or other thinking problems.  These are usually evaluated with:

Probably the most common question I get, as with most doctors, has to do with distinguishing between dementia and the normal memory and thinking problems that come with aging.    To be honest, it can be hard to tell!  How many of us forget where we left our keys every now and then?  Or get the day of the week wrong (wait, is it Tuesday or Wednesday today)?  I know I sometimes repeat stories and observations that I had just told not too long ago.  Who doesn’t do that?

But is it to be expected, or is it dementia?

A great resource to help with that question can be found by clicking on the Alzheimer’s Association’s “10 Early Signs and Symptoms of Alzheimer’s” here.  I especially like how this site clearly explains each of the 10 symptoms, then gives examples of what typical age-related symptoms may be.  It’s a great way to think about the symptoms either you or a loved one may be having.  Check it out. 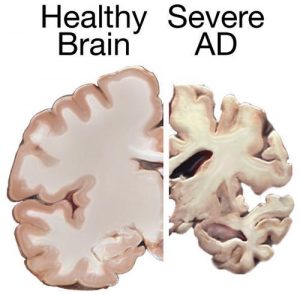 So what is going on in the brain of a patient with Alzheimer’s Disease?  That is the whole question, really, because if we can figure that out, then our treatments can hopefully improve.  I find it rather astonishing that we know relatively little more about the brain of an Alzheimer’s patient than did Dr. Alzheimer himself 115 years ago.  And what we know is fascinating.

Dr. Alzheimer found in the brain of his patient some unusual structures.  He found plaques and tangles.  The former are misshapen proteins clustered together in bunches and the latter are damaged nerve cells with twisted proteins intertwined with them.

And to this day we still talk about plaques and tangles in the brains of Alzheimer patients.  That hasn’t changed much.  What has changed is our understanding of the disease process and how it affects people.  We have much more understanding that this is a neurological disease that is progressive.  And perhaps most importantly, we are learning a great deal more about how those plaques and tangles appear.  Once we figure that out, we can perhaps find a way to stop it in its tracks.

I encourage you to learn more by checking out the following two resources.  The first is an interactive slide show (just click through the slides) from the Alzheimer’s Association.  Check it out if you want to learn more about what is going on in the brain of people with Alzheimer’s.  Good description with simple diagrams.

The second is a TED talk video from a leading researcher on Alzheimer’s.  He describes the need for more research and gives some hope that we can actually solve this problem if given the will to do so.  Click the video below to watch it – it is just about 8 minutes long

Other forms of dementia

As I mentioned above, Alzheimer’s is not the only type of dementia.  It is just the most common.  Other kinds include Lewy Body Dementia (LBD which is associated with Parkinson’s Disease), vascular dementia (due to insufficient blood to the brain over time), medications, frontotemporal dementia.  There are lots of others as well.

I can’t adequately explain each of these, so rather than try to do so I’ll simply put some links to more information.

For a really academic, thorough discussion of the various types of dementia, check out the National Institute on Aging from the US government.  They have a site called The Dementias:  Hope Through Research.  Fair warning:  though it is accurate and reliable, it is nonetheless fairly dense academic reading.

For a less in-depth but helpful overview, you may wish to check out this site from the Cleveland Clinic.  That organization is highly respected and reliable.

I’ll end with a personal tale that makes me smile . . .

My grandfather on my dad’s side was a true gem of a person.  He lived to a pretty good age into his 90s and was independent and interactive most of his life.  I still remember playing cribbage and cards with him at his home in Madison.  Funny what other details remain in my memory banks.  Like the oscillating fan that he and my grandmother owned – an older model – where the grill protecting the blades had wires about 4 inches apart.  Completely unsafe by today’s standards as any kid could put your hand right into the fan.  And grandpa was the most patient and kind person you could ever meet.

But in his later years his memory and his thinking dwindled.  He started to say things that, let’s just say, didn’t make much sense.  One of those things he said never failed to make us smile.  It was about a cane he used to carry, a knobby wooden one if I remember correctly.  At some point we asked him about his cane, and he told us that his cane came from the moon.  Yes, the actual moon.  And he was completely serious.  He could still sing songs – in Norwegian – from his childhood but could not be dissuaded that his cane did not in fact come from the surface of the moon. 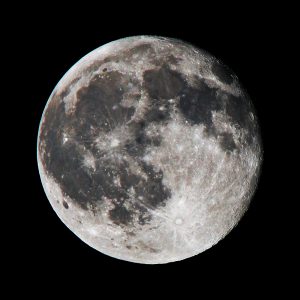 I guess we knew right about then that grandpa had some dementia.

So many of us are touched by the cognitive decline of someone in our lives.  I hope this post has been of some help to you.

Leave me a comment below if you wish and listen to the podcast here.